Surprise Sundancers Helping the Youth of our community

During the 2019 Spring Training season of scholarship awards the Surprise Sundancers have reached the milestone of giving out more than $ 1 Million of donations for the youth of the Northwest Valley since their inception. The 2019 round of scholarships will set a record for most total yearly scholarships ($213,750 to 71 scholars) and the most first year scholarships (52 new scholars). Seventeen of the 2019 new scholarship awards of $5,000 per year will be designated as Mark Coronado Scholarships. The individual scholarship winners will be introduced during a pre-game ceremony at the March 9th game in Surprise Stadium.
With our charter to raise funds to positively influence Northwest Valley youth, the Surprise Sundancers have given out $ 1,149,186 in donations to individuals and organizations that provide services to the youth of the West Valley. Funds are raised for scholarships and through a 50/50 Raffle that is held during each Spring Training game. The 50/50 Raffle program has been in operation since 2014 and provides $ 94,436 in donations to 17 local organizations that benefit local youth.
The majority of the donations are raised for scholarships with $1,054,750 given in scholarships since 2006. The first year, Surprise Sundancers provided $250,000 to Dreamcatcher Park, the award-winning, fully-accessible athletic facility located on the Surprise Recreation Campus near Surprise Stadium. Dreamcatcher Park is a multi-use athletic facility designed to provide a safe and fun place for athletes with special needs to participate in sports and recreation programs. 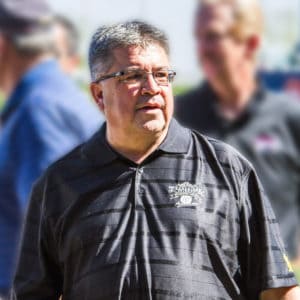 Mark Coronado, was known as an ambitious, gifted leader who tirelessly worked to improve the quality of life for all families in the West Valley.  Mark began working with the City of Surprise in 2000.  During his 17 years with the City, Mark served as the Director of the Community & Recreation Services Department, while simultaneously serving at various times as Interim City Manager, Acting Economic Development Director and Acting Communications Director, as well as an executive board member and past president of the Arizona Cactus League Association.

He was instrumental in bringing the Texas Rangers and the Kansas City Royals to their Spring Training home in Surprise.  Mark also pioneered opportunities for children to participate in a wide-range of recreational sports and after school programs and hosted Special Olympics for a number of years.  Mark aimed to provide families of the West Valley safe places to create lasting memories including children with learning challenges through the construction of DreamCatcher Park, a fully accessible athletic field.  In 2015, he was recognized as one of the most influential businessmen in sports along with Michael Bidwell and Robert Sarver.

Who Are the Sundancers?

To apply for this ACF Scholarship, beginning January 1, 2022, please visit:

Who Are the Sundancers?